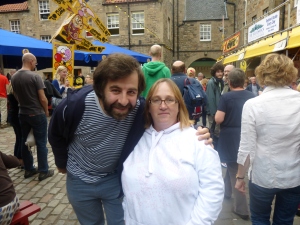 David O’Doherty and his small keyboard did not disappointing. We had seen David a couple of years ago and decided to see him again this year. Haven’t seen on him on television for a while so his material was fresh. His act is a mixture of stand up and song. Go and see him!

We were at The Pleasance again today and I met David. Very nice man.

After too many years as an IT developer with various financial organisations I went back to University to study to be a teacher. I graduated in 2008. I am a mother of two - one girl and one boy. I am interested in new technologies especially how they can be used in education. I am Apple Teacher. I am a keen football supporter but gave up my season ticket due to being disheartened and lack of money/time.
View all posts by AMWeston →
This entry was posted in Reviews and tagged Comedy, Edinburgh Fringe, The Pleasance. Bookmark the permalink.