On previous days we had been on the edge of Times Square but it was now the time to venture into the main part to get tickets from the ticket booth. The queues were long but not so bad for the play line so Terry queued while the kids and I ventured around Times Square – well the M & M and Hershey’s store. In both we were hit by the smell of chocolate on entering the the crowds! The M & M store is on 3 floors, we only made it to the 2nd to fill our bags with m&ms. Hopefully some will make it home! It was then a trip across the street to Hershey’s. Not so big but still filled with chocolate. A quick purchase before heading back to Terry.

Terry had got through the queue when we got back. He had managed to get us four tickets to see Cat on a Hot Tin Roof staring Scarlett Johansson.

A quick trip back to the apartment before heading out. Times Square was still busy and although it was becoming dark it still felt very light due to all the neon!

Dinner at Sardi’s before the show. The play was excellent. Scarlett Johansson is not just a Hollywood star, so glad Terry managed to get the half price tickets. 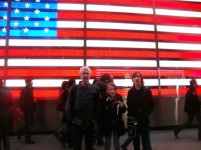 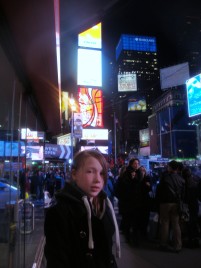 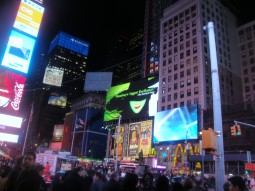 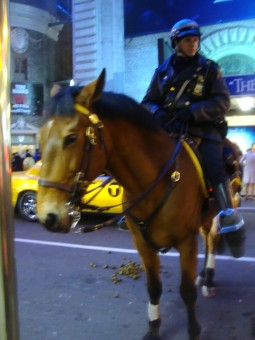 After too many years as an IT developer with various financial organisations I went back to University to study to be a teacher. I graduated in 2008. I am a mother of two - one girl and one boy. I am interested in new technologies especially how they can be used in education. I am Apple Teacher. I am a keen football supporter but gave up my season ticket due to being disheartened and lack of money/time.
View all posts by AMWeston →
This entry was posted in New York, USA and tagged Broadway, New York, Times Square. Bookmark the permalink.