After 9/11 memorial it was time for coffee. A short walk away we found Joe’s Deli, mainly frequented my local construction workers, we stopped and had a coffee. Not a tourist haunt but great coffee and bagel.

We headed for Century 21 for some retail therapy. After an hours shopping with Eleanor all had had got were two pairs of jeans for her. Terry and Matt had more success. Century 21 is worth a visit – it’s the only place I’ve seen Superdry at reduced prices.

Outside the store we looked for somewhere to eat, we saw a cafe up the street and headed there for lunch. It was a self service deli/cafe where the food is paid for by the lb. frequented by locals with some passing tourists, it was good cheap food.

The kids wanted to go to a comic book store and we found a branch of Mid Town comics nearby.

It was then a stroll up Broadway to find the Scholastic store. I was disappointed, though we getting foot sore and weary. It was time to head back to the apartment. 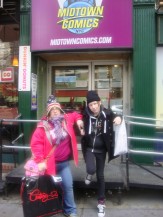 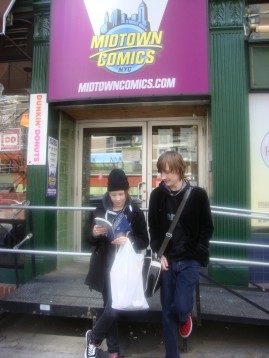 After too many years as an IT developer with various financial organisations I went back to University to study to be a teacher. I graduated in 2008. I am a mother of two - one girl and one boy. I am interested in new technologies especially how they can be used in education. I am Apple Teacher. I am a keen football supporter but gave up my season ticket due to being disheartened and lack of money/time.
View all posts by AMWeston →
This entry was posted in New York, USA and tagged New York, Shopping. Bookmark the permalink.