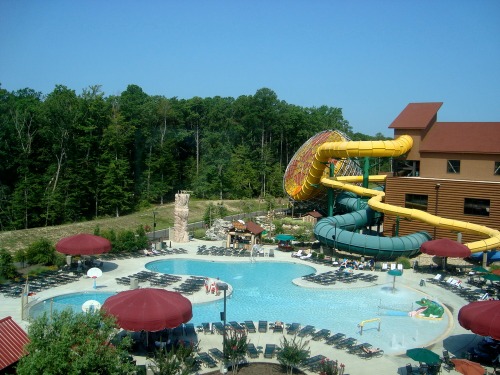 We have been spending a couple of days at the Great Wolf Lodge in Williamsburg. It is an extremely child friendly with an indoor and outdoor water park. This has meant we have been able to go to the water park both days we have been here instead of going to Water World USA. As I write the children are out around the hotel playing Magic quest. It is safe enough for them to do this. There is plenty of other things to do including a spa for adults and children. I made use of the spa to have a pedicure which was wonderful.

The hotel has been great for the kids and we have enjoyed it to a certain extent. The thing that has disappointed us most about the hotel is the level of service. On our first night we ate at the hotel – it was disappointing and expensive. So the second night we drove five minutes down the road to Pierces Pit – an excellent bbq place. An excellent meal for half the price of the hotel. When we booked the hotel we organised breakfast for both days which was a good move as it is a buffet breakfast and we can eat as much as we can. I think we would come back to the hotel but would not eat dinner or lunch at the hotel.

After too many years as an IT developer with various financial organisations I went back to University to study to be a teacher. I graduated in 2008. I am a mother of two - one girl and one boy. I am interested in new technologies especially how they can be used in education. I am Apple Teacher. I am a keen football supporter but gave up my season ticket due to being disheartened and lack of money/time.
View all posts by AMWeston →
This entry was posted in USA, Virginia and tagged Hotels, Virginia, Williamsburg. Bookmark the permalink.