The third thing we did on Saturday was to rest our weary legs a take a trolley tour round Washington. In the morning we did the sights around the centre of Washington, getting off to look at the Lincoln Memorial. Then in the afternoon it was onto another trolley to take in the outer part of the city including Georgetown and National Cathedral. 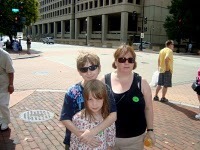 The tour started opposite the FBI building – an obligatory picture for me as a fan of the TV series Bones. The no longer allow tours of the building maybe when we return they will have started again.

Another iconic building that we passed was the Capitol building. It’s strange seeing it as I had seen it so many times on television. We still hope to get a closer look at the building and grounds.

Union Station is near the Capitol building and looks very impressive from the outside. It’s the online railway station in Washington and is suppose to be as impressive as New York’s Grand Central – another one we hope to see before we leave.

One of the next buildings we passed was the memorial to Thomas Jefferson. They are big on monuments and memorials in Washington – most of which are very impressive.

We hopped off the bus at the Lincoln Memorial – see blog post below – for a quick bite to eat and a look round the memorial. While we were there we also saw the Korean War Memorial – one of several war memorials on the mall. I learned that Britain taken part in that war what was news to me – I suppose I watched too much MASH and only thought it was the Americans that were involved in that war.

Back on the trolley we went passed several of the Smithsonian museums, including the Museum of American History, the castle and Museum of Native Americans. The number of museums and art galleries on the mall are astounding. I don’t think we’ll get to them all but we will certainly visit a few more before we leave Washington.

As we had time before going back to the Washington Monument we went on the outer tour of the city. Here we had a better view of the White House, complete with snipers on the roof the first time we passed. We had a view of the national cathedral – we did not get off. Interesting fact is that there is a gargoyle in the image of Darth Vader – the cathedral was only completed in the late part of last century. Heading back into the city we passed through Georgetown, another place we plan to visit – a great shopping area.

Both tours were excellent and highly recommend doing something like it. The tours gave us ideas of where things are away from the mall and what else we still want to visit. It is beginning to look like a week is not enough time to see everything we want to see, but we’ll try to do our best.

After too many years as an IT developer with various financial organisations I went back to University to study to be a teacher. I graduated in 2008. I am a mother of two - one girl and one boy. I am interested in new technologies especially how they can be used in education. I am Apple Teacher. I am a keen football supporter but gave up my season ticket due to being disheartened and lack of money/time.
View all posts by AMWeston →
This entry was posted in USA, Washington and tagged FBI Building, Georgetown, Jefferson Memorial, Washington DC. Bookmark the permalink.